According to the new RE/MAX 2021 Condominium Report, condominium apartment sales in the Calgary real estate market have soared year-to-date as buyers seek to achieve home ownership while interest rates remain low. In the first eight months of the year, almost 2,800 apartment units have changed hands in the city, an increase of 82.6 per cent over the 1,522 units sold during the same period in 2020. Average price has climbed close to three per cent year-to-date, rising from $255,852 in 2020 to $263,480 in 2021. The lion’s share of activity has occurred at the most affordable price points in 2021, with three out of four sales taking place in the $150,000 to $349,999 price range. 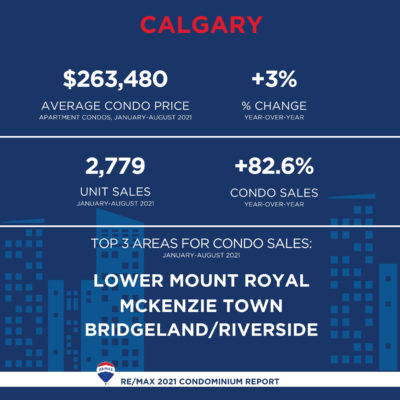 Condo inventory levels, which are up 16 per cent over last year, are adequate at present, with a wide range of product available across the board. Newer condominium apartment product offering the latest finishes such as granite/quartz countertops in kitchens and bathrooms, hardwood flooring and stainless-steel appliances remain most popular with today’s buyers. Purchasers willing to consider older condominium stock can realize home ownership at a significantly lower price point. While few and far between, there are some areas of the city where demand for condominium product currently exceeds supply. Well-established neighbourhoods close to the inner core, such as Hillhurst and Bridgeland, top the list, offering buyers an easy commute to the core. Condo sales are up almost 39 per cent year-to-date in Hillhurst, with unit sales rising from 18 (2020) to 25 (2021), and average price up over last year’s levels, in large part due to two sales over the $1-million price point this year.

Some buyers are choosing condominium apartments on the city’s outer perimeters, in residential neighbourhoods such as Sage Hill, Nolan Hill Heights and McKenzie Towne. Sales have doubled year-over-year in McKenzie Towne (27 units in 2020 versus 54 in 2021), with average price climbing eight per cent to $219,400.

The luxury condo segment in the Calgary real estate market is also showing signs of life, with sales of condominium apartments over $750,000 on the upswing in Calgary. Thirty-five apartments were sold over $750,000 between January 1 and August 31 of 2021, up from 14 unit sales during the same period in 2020. Eau Claire has been one of the more popular neighbourhoods for luxury condo sales this year, with five out of 40 condominiums in the area selling for over $900,000. Affluent buyers have returned to the condominium market, with many hoping to realize home ownership before values climb.

Investment is happening as well in Calgary real estate, with interprovincial buyers from Ontario and B.C. leading the charge. Given the current economic outlook, there is reason for cautious optimism moving forward. Recovery in the oil and gas industry is underway as global demand climbs. RBC’s provincial outlook for Alberta reports that capital spending is also expected to increase, growing by an estimated five per cent this year. Unemployment levels have been trending downward. Alberta is forecast to lead the country in terms of economic strength in 2021, with GDP growth climbing 5.9 per cent and another 4.9 per cent by year-end 2022. With solid economic fundamentals underpinning the city’s residential real estate market, housing sales are likely to continue climbing at a healthy pace throughout the remainder of the year.

At the national level, the RE/MAX report analyzed five key Canadian housing markets and more than 100 sub-markets, and found that buyers looked to condominium properties in 2021 as the affordable housing option, in the face of rising freehold values. The West experienced the greatest sales gains, with Greater Vancouver and Calgary condo sales up 87 per cent and 83 per cent respectively between January 1 and August 31 of 2021, compared to the same period in 2020, when a notable downturn in condo sales occurred.

The Greater Toronto Area (GTA) was the leader in condo sales in East Canada, up 71 per cent over the same period in 2020, followed by Halifax-Dartmouth (+36 per cent) and Ottawa (+29 per cent).

In terms of price growth in Canada, the greatest gains occurred in the East, with both Halifax-Dartmouth and Ottawa posting double-digit price gains of 30.0 per cent and 18.0 per cent respectively. More moderate appreciation was reported in Greater Toronto (+seven per cent), Vancouver (+6.7 per cent) and Calgary (+three per cent).

Growth in condo market share across the Canadian real estate market occurred in all but one regions surveyed, according to the RE/MAX Canada 2021 Condominium Report. The greatest concentration of condo sales was reported in Greater Vancouver, where condos represented nearly half (48.2 per cent) of total residential sales in 2021, up from 46 per cent one year ago. Condominium apartments and townhomes in the GTA followed with a 34.5 per cent share of the overall market, up from 30.8 per cent one year earlier. Almost one in four properties sold in Ottawa between January 1 and August 31, 2021 was a condominium, compared to the same period in 2020 (24.3 per cent versus 23.3 per cent). Meanwhile in Halifax-Dartmouth, the condominium segment represented 17.3 per cent of total residential sales, up from 15 per cent one year earlier. While overall sales climbed in Calgary year-over-year, condominium market share declined by just under one per cent in 2021, to 14.2 per cent.