While detached housing values show substantial year-over-year gains in the first half of 2022, successive increases to the Bank of Canada’s (BOC) overnight rate put a damper on price appreciation in the second quarter of the year in regions across the Greater Vancouver and Greater Toronto housing market, according to a report released today by RE/MAX Canada.

To illustrate, the RE/MAX Canada 2022 Hot Pocket Communities Report compared market activity in the first and second quarter of 2022 in terms of unit sales and prices, analyzing 60 Toronto Regional Real Estate Board (TRREB) districts and 16 regions within the Real Estate Board of Greater Vancouver (REBGV), and six areas in the Fraser Valley Real Estate Board (FVREB). In the Greater Toronto housing market, the Central and West End of the 416 held up relatively well in terms of average price while Durham, Peel, York, Halton and Dufferin surrendered some of the staggering gains realized in recent years. Preliminary estimates of Q2 median prices in Greater Vancouver’s Squamish area and the Sunshine Coast were comparable to first quarter figures, while West Vancouver and Vancouver West/Howe Sound reported moderate increases. 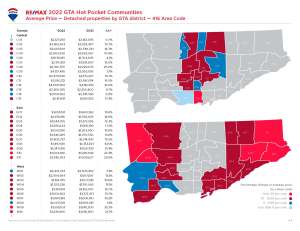 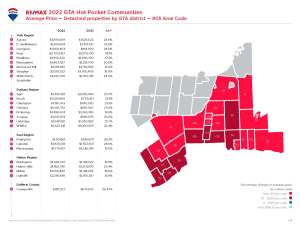 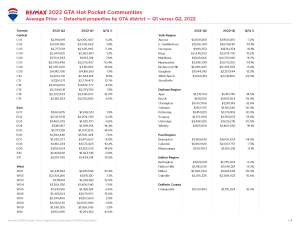 “Given that the core has traditionally been more resilient, bolstered by strong demand, a finite supply of homes available for sale, higher household incomes, and greater equity at the top end of the market, the results are not unexpected,” says Alexander. “The price softening was clearly more evident in suburban areas and the outer perimeters of the 416, most of which experienced strong upward momentum during the height of the pandemic as buyers sought to leave the city.”

Also bucking the downward trend in the Greater Vancouver housing market in terms of preliminary estimates of Q2 median values are the core regions of Vancouver West (+2.4 per cent) and West Vancouver/Howe Sound (+8.2%). Squamish and the Sunshine Coast also held steady, with no change reported between the first and second quarters. Seventy-five per cent of markets in Greater Vancouver, however, experienced a downturn in Q2 median values, coming off peak levels reported in the first quarter of the year. Most of the declines reported were below 10 per cent, with one outlier – Whistler/Pemberton, which fell by just over 16 per cent ($3,020,000 vs. $3,622,500). Given fewer sales and the types of detached properties in that particular market, an increase in the number of homes sold at lower price points could drag the median price down. In the Fraser Valley, percentage declines in average price ranged from a low of just over three per cent in Langley to a high of close to 13 per cent in Delta – North between the first and second quarter. 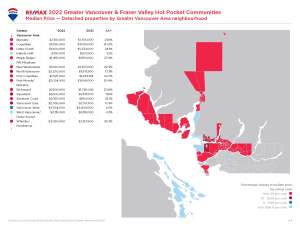 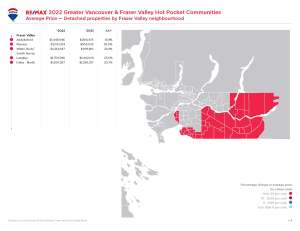 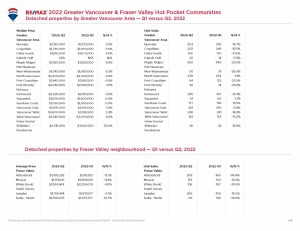 “While we have seen some easing in prices, the sky is nowhere near falling,” explains Elton Ash, Executive Vice President, RE/MAX Canada. “In fact, there is relative stability in terms of market conditions, so buyers shouldn’t expect big bargains. Sales-to-active listings remain squarely in balanced territory overall and even tight in some areas. In Vancouver, for example, supply was lower this June than last in 50 per cent of markets and sales are down accordingly. This trend will likely keep prices fairly stable moving forward.”

RE/MAX REALTORS® also noted a reversal in pandemic trends over the past six months, as work-from-home situations change and buyers rethink the exodus to suburban and rural areas. Second-quarter detached home sales rose year-over-year in 40 per cent (24/60) of regions across the Greater Toronto housing market, with the vast majority of increases noted the 416 area code (20/60). However, affordable price points also continued to draw buyers. Durham Region was also a hot spot with half of its markets reporting an uptick in home-buying activity (4/8). 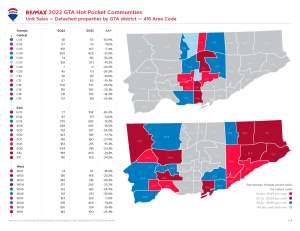 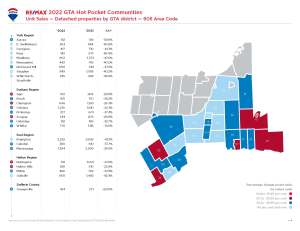 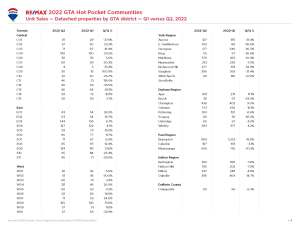 The Greater Vancouver housing market experienced an increase in sales in 31 per cent of regions (5/16), including Island-Gulf, North Vancouver, Squamish, Sunshine Coast and Whistler/Pemberton. 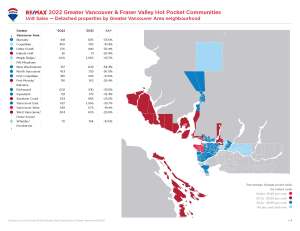 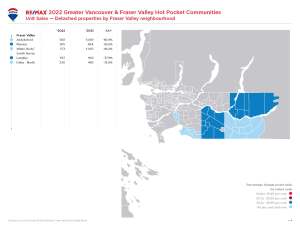 “For those buyers that were active in Q2, improved housing affordability due to easing prices and the threat of higher rates down the road clearly provided the impetus for many to leap into detached home ownership,” explains Alexander. “Greater selection, particularly in coveted hot pockets, also played a significant role in April and May as the pandemic-fuelled buying spree drew to a close. Buyers locked into five-year fixed terms as the overnight rate hovered between one per cent in early April to 1.5 per cent in early June.”

There have been some existing sellers who have used this opportunity to trade up to larger homes or more desirable neighbourhoods closer to the city. The ‘spread’ – the difference between the selling price of an existing property and the purchase price of a new one – has narrowed considerably, and given mortgage portability, the move can work in favour of the buyer. Condominium and strata owners have also seen benefits in the “spread” as values for their apartments and townhomes have remained relatively stable, while detached housing values have softened.

“Buying intentions overall are expected to remain healthy, even if some buyers pause temporarily,” says Ash. “While interest-rate hikes have edged up carrying costs, we can’t discount the effect of the tight rental market, which has seen average rents increase by double-digits year-over-year in the GVA and GTA. As potential buyers face those realities, many will still conclude that the benefits of ownership make better financial sense.”

Several regions in the Toronto housing market stood out in terms of sales. Some of the areas that have seen the greatest activity include the West End, where a single-detached home on a 50-ft. lot with a price tag under $1.5 million is still a possibility. Both W04 (comprised of Yorkdale-Glen Park, Briar Hill-Belgravia, Maple Leaf, Rustic, Brookhaven-Amesbury, Beechborough-Greenbrook, Mount Dennis, Weston and Humberlea-Pelmo Park) and W06 (which includes Alderwood, Long Branch, New Toronto, and Mimico) noted an uptick in sales in the second quarter compared to the first, with the average price in W04 hovering at just over $1.3 million and the average in W06 sitting at just under $1.5 million.

The East End of the Toronto housing market saw sales climb 26.5 per cent in E01 in the second quarter compared to the first. With close proximity to the downtown core and the Lake Ontario shoreline, and an average price of $1,863,815, this community has proven exceptionally hardy under current circumstances.

Those seeking affordability helped prop up second-quarter sales in Ajax, Whitby, Clarington and Scugog in Durham Region. With the average price of a single-detached home hovering at just over $1 million in Clarington to just over $1.2 million in Ajax, the region has an abundance of entry-level product for cost-conscious buyers.

Properties at higher price points have also proven resilient across the Greater Toronto housing market, with detached sales over $2 million up 10 per cent in the first half of the year compared to the same period in 2021. Not surprisingly, the softening in overall price has brought out the bargain hunters in the luxury segment, which would explain the increase in sales in Bedford Park-Nortown, Lawrence Park North and South (C04), Rosedale, Moore Park (C09) and Leaside (C11) in the central core, where average prices hovered at just under $3 million, $4.1 million and $3.126 million respectively in the second quarter of the year.

Some of the most durable areas in the Vancouver housing market include Burnaby, Coquitlam and Port Coquitlam. These established communities are drawing purchasers who are looking for affordable detached housing with good accessibility to the downtown core, with preliminary estimates of the Q2 median values ranging from just $1.445 million in Port Coquitlam to $2.12 million in Burnaby. North Vancouver and Squamish have also held up well, with both experiencing rapid growth well before it was further accelerated by the pandemic.

Active Inventory Down in GTA & GVA

“Inventory remains a puzzle that policy can’t solve in the foreseeable short or long term,” says Alexander. “It’s a real challenge, as supply of detached homes remains low from a historical perspective and also in the context of population growth and future needs. This will remain a crucial factor impacting Toronto and Vancouver, which are now seen as world-class markets. Tougher market conditions and a possible recession will be major market hurdles, but history reminds us that recessions often bring strong rebounds. There’s always a reason buyers say, ‘I wish I’d bought back then.’ Real estate has traditionally stood the test of time. Looking ahead, urbanization alone will be a significant boon to future housing demand, as Canada’s urban population is projected to grow by 10 million by 2050.” (Source)