After a soft start to the year, sales of Luxury Toronto real estate is on the upswing, surpassing 2018 trough levels. Year-to-date sales in the GTA of freehold and condominium properties priced in excess of $5 million topped 100 units between January and October 31. This is up 8.5 per cent from the 94 sales reported during the same period one year ago.

Against a backdrop of lower single-detached housing values, which are down about three per cent from 2018, domestic homebuyers have been steadily returning to the uber-luxe market, especially in Toronto proper. The average price of a freehold property over $5 million now hovers at $6,517,143 down from $6,726,532 in 2018.

“The one consistency in luxury Toronto real estate throughout 2019 has been value – and it’s evident from the bottom end of the market to the top,” says Christopher Alexander, Executive Vice President and Regional Director, RE/MAX of Ontario-Atlantic Canada. “Homebuyers at virtually all price points – including uber-luxe – are kicking the tires once again. As a result, momentum is building in the overall market, which is reflected in the escalation in sales at both the $2 million and $5 million price points.”

“Sales of luxury properties between $3 and $5 million are expected to climb in the year ahead as the ripple effect works its way through various price points,” explains Alexander. “Sales at lower price points tend to stimulate sales at the next level, as homebuyers trade-up to larger homes or more desirable neighbourhoods. Our research has found that the spread is narrowing with each month’s sales figures.”

Recovery to date has been strongest in Toronto proper, where freehold sales over $5 million were up 26 per cent compared to one year earlier (73 versus 58 sales). The top neighbourhoods for home sales in the $5-million-plus category are Forest Hill and Rosedale, where transactions are on par or ahead of levels reported in 2017. York Region followed in second place with a 22-per-cent increase in sales, from nine transactions in 2018 to 11 in 2019.

One of the most interesting segments of the GTA’s luxury market this year has been the condominium sector. Demand for apartments and townhomes at higher price points continues to climb as Baby Boomers and empty nesters seek to downsize. Inventory issues have been a major obstacle in recent months, with demand outpacing supply throughout the downtown core, placing upward pressure on prices and in some instances, creating bidding wars. At press time, 118 upscale condominium apartments and towns were listed for sale over the $2 million price point in Toronto proper, with an average price of $3,510,743.

“The fog has lifted – buoyed by solid economic factors, but also by the belief that the worst is behind us,” says Alexander. “The housing market has shifted into recovery mode. Luxury home sales are climbing, prices are stabilizing, and demand is on the upswing for upscale product.”

Buyers from Mainland China are also slowly making their way back into the GTA’s high-end market, this despite the non-resident speculation tax and limited access to funds, as the Chinese government restricts investment outside of the country. During the run-up in 2016 and 2017, Chinese buyers were responsible for an estimated 60 per cent of home-buying activity over the $6 million price point.

Heading into 2020, a number of factors bode well for the luxury sector

Heading into 2020, a number of factors bode well for the luxury sector. The Economist Intelligence Unit’s 2019 Wealth Opportunity Index expects the number of High-Net-Worth-Individuals (HNWI) in Canada (those with at least $1 million in investable assets) to double over the next decade, rising from just under half a million to over 900,000. Immigration is also expected to play a key role in the top end of the housing market, as HNWIs from outside Canada choose to make this country their home. Approximately 4,000 HNWIs emigrated in 2018, according to the New World Wealth Report, and it is anticipated that the trend will continue.

Scouts for Hong Kong investors have also been an increasingly common sight at luxury properties in the GTA in recent months. While their presence has yet to translate into a notable uptick in sales to date, their arrival suggests movement in the future.

“While home sales in the luxury segment are off peak levels reported in 2017, great strides have been made over the last six months,” says Alexander. “We are heading in the right direction. The momentum is expected to continue, with increased demand for high-end product in 2020 propping up values as well. The insatiable appetite for luxury homes has subsided, but healthy demand still exists in the GTA.” 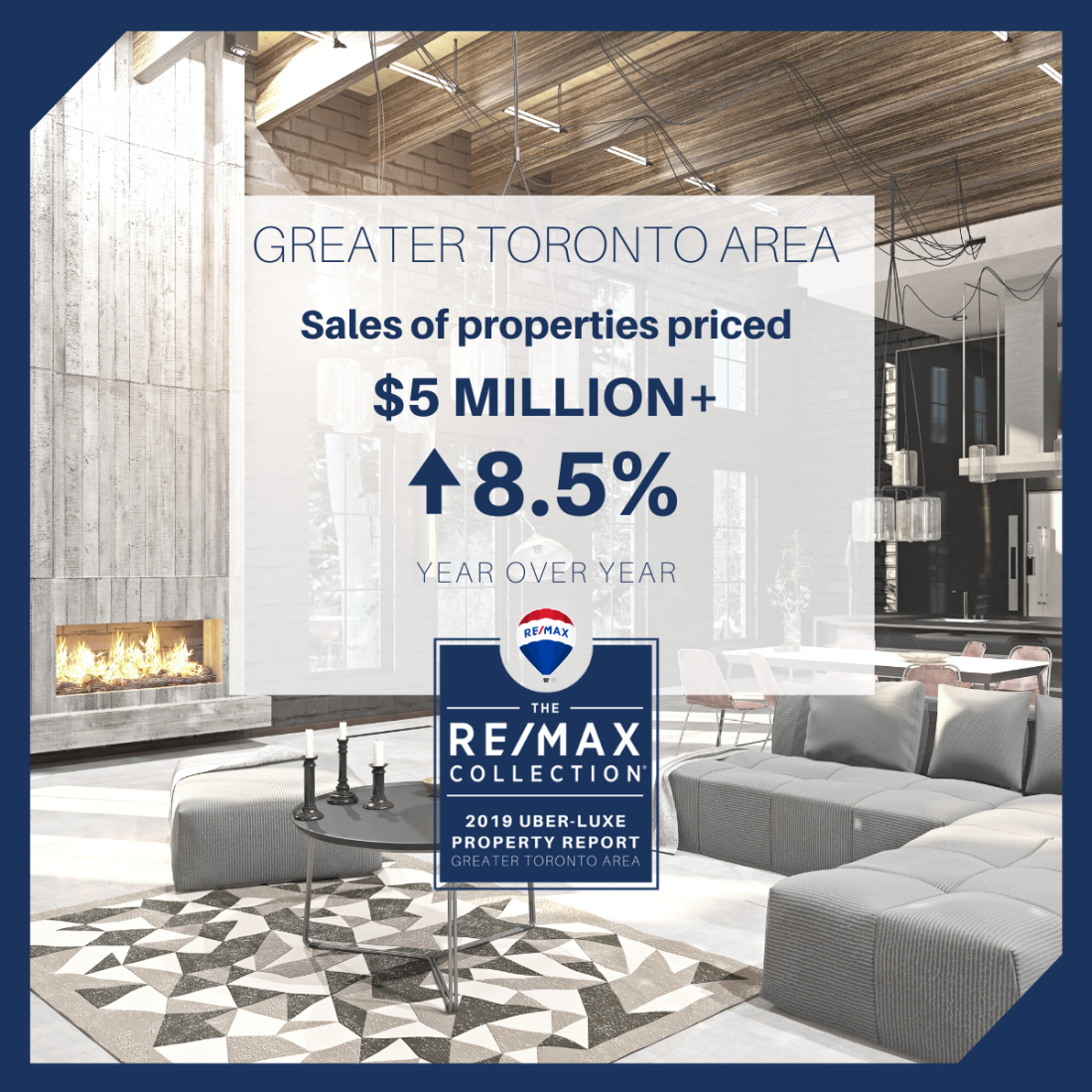 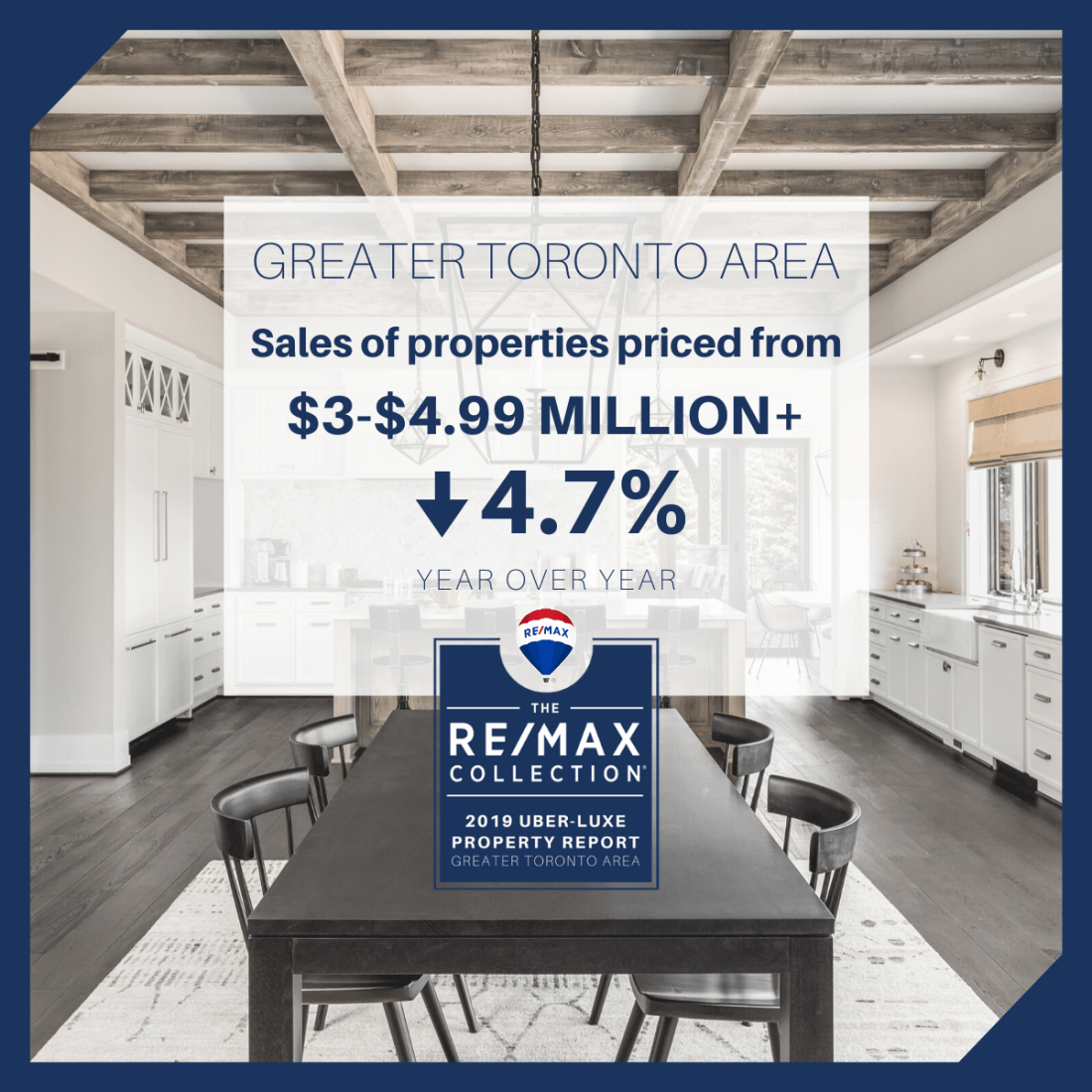 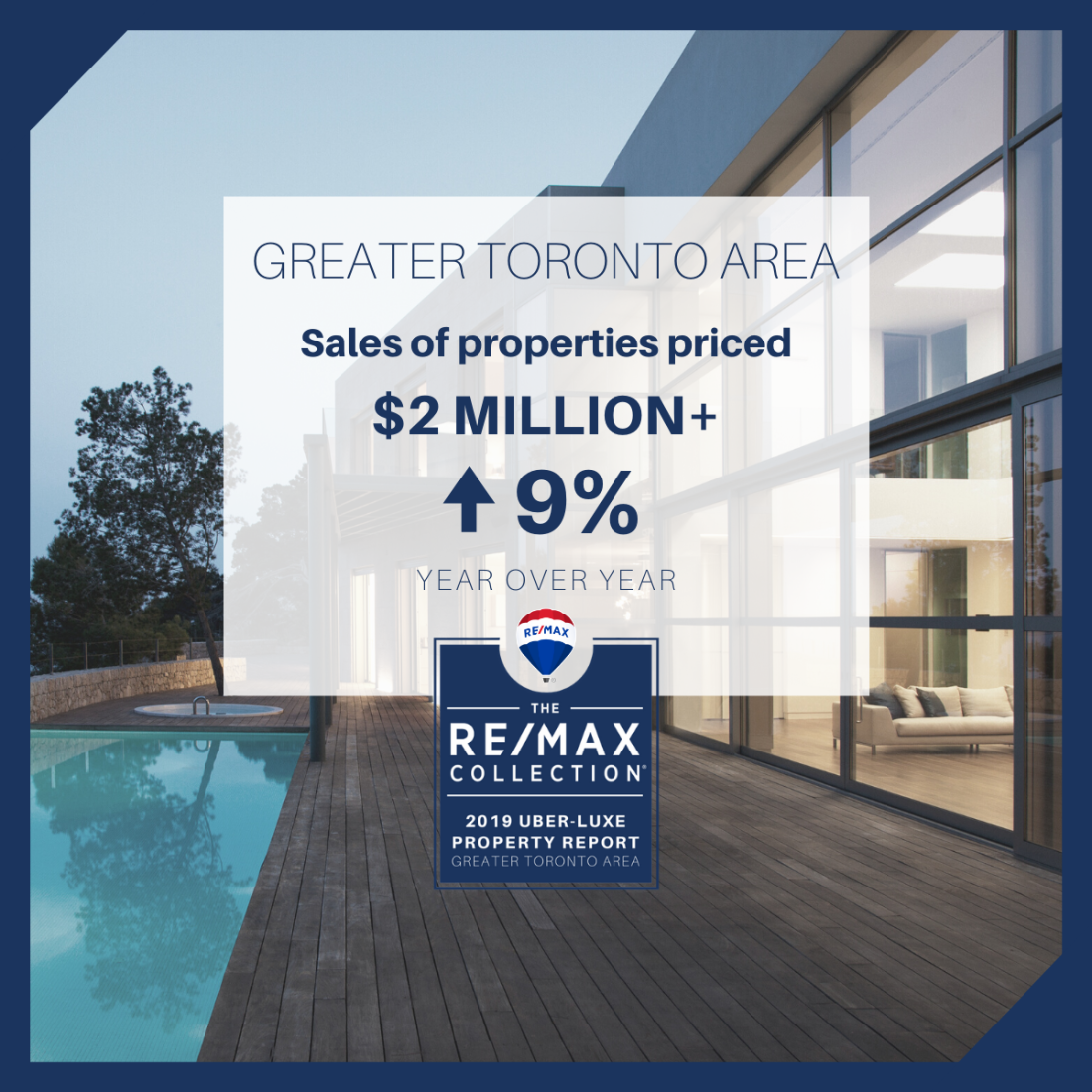 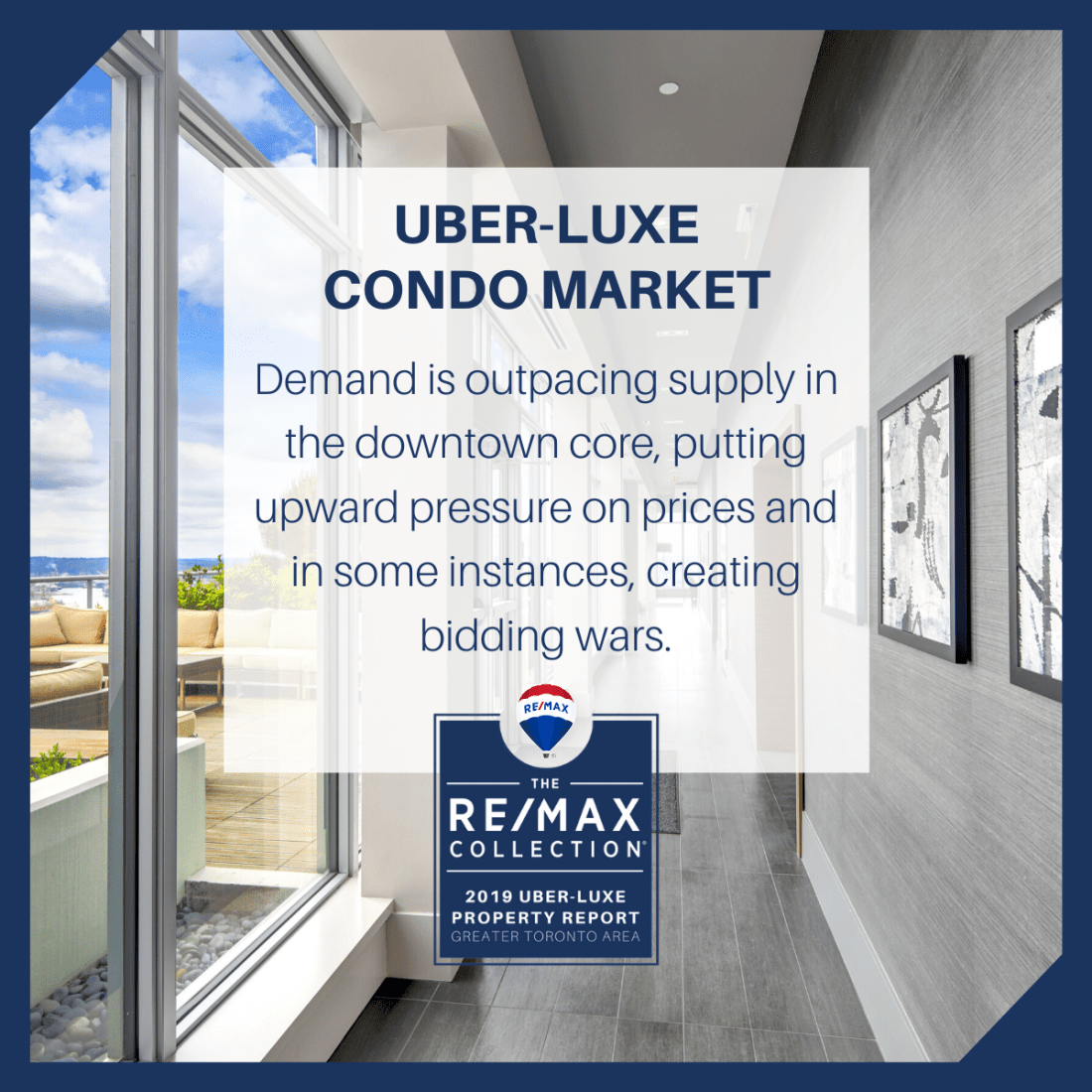 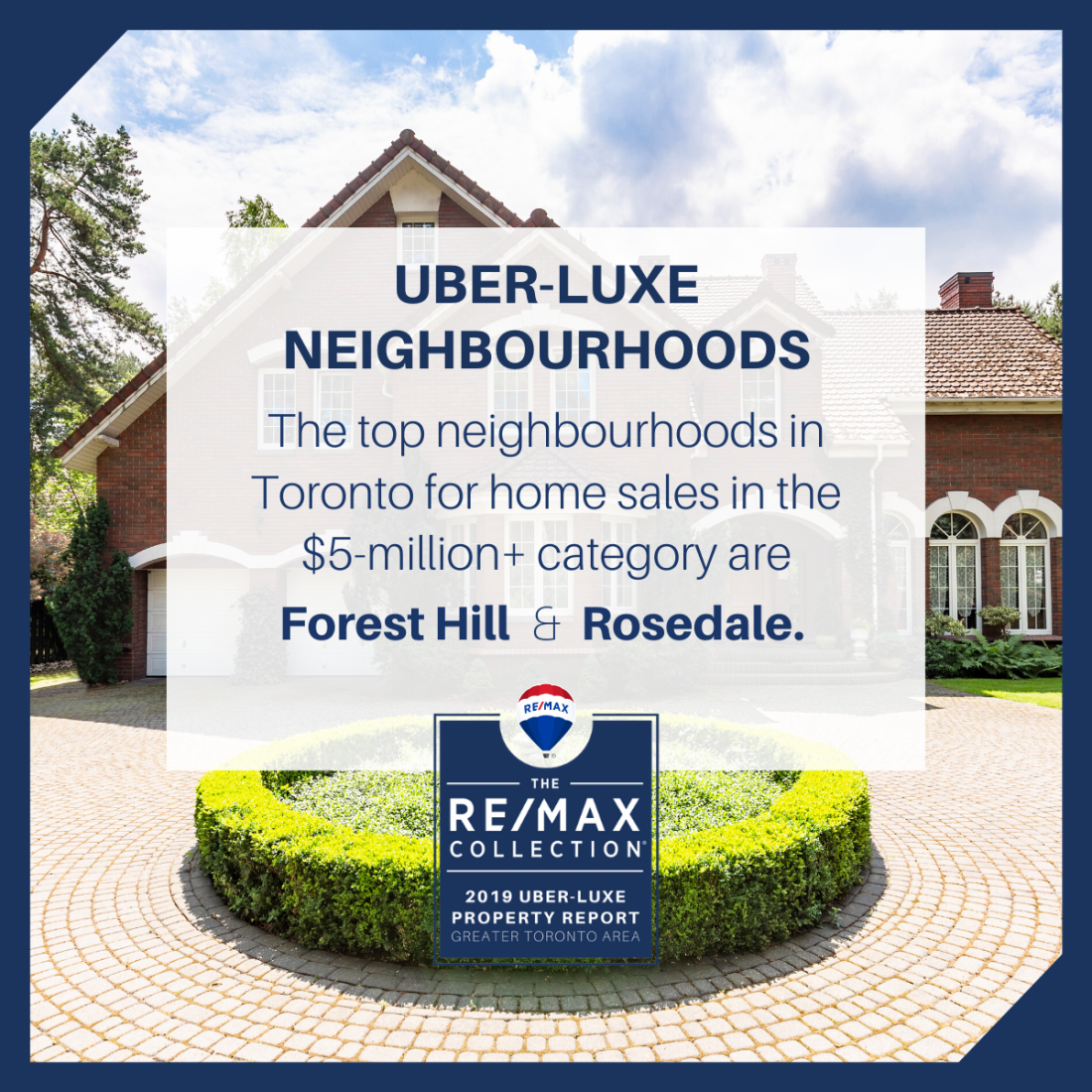