Among those who call themselves “real estate disruptors” in the 21st Century, few will have the endurance needed to turn this industry on its head. To see how that’s done, flash back to 1980 when renegades Frank Polzler and Walter Schneider, founders of RE/MAX INTEGRA, saw an opportunity to incite change. The pair had big ideas back then, and as the company celebrates its 40th anniversary in 2020, it’s clear that these original real estate disruptors aren’t done yet.

In 1980, Canada’s real estate industry was controlled by banks and trust companies, with a few national brands that saw profits heavily favouring brokers. The industry ran on an inherently flawed business model that saw top-producing agents subsidizing non-producers. Polzler and Schneider recognized this professional pain point as an opportunity to bring the cream to the top, so to speak. And thus, RE/MAX INTEGRA – the “home of the top producer” – was born.

RE/MAX INTEGRA’s innovative agent-centric business model meant agents kept their commissions, which naturally attracted top producers. True to Polzler’s and Schneider’s vision for the company, the best agents joined the brand, they stayed and they conquered. Today RE/MAX has #1 market share in Canada – a position that it has held consistently since 1987. 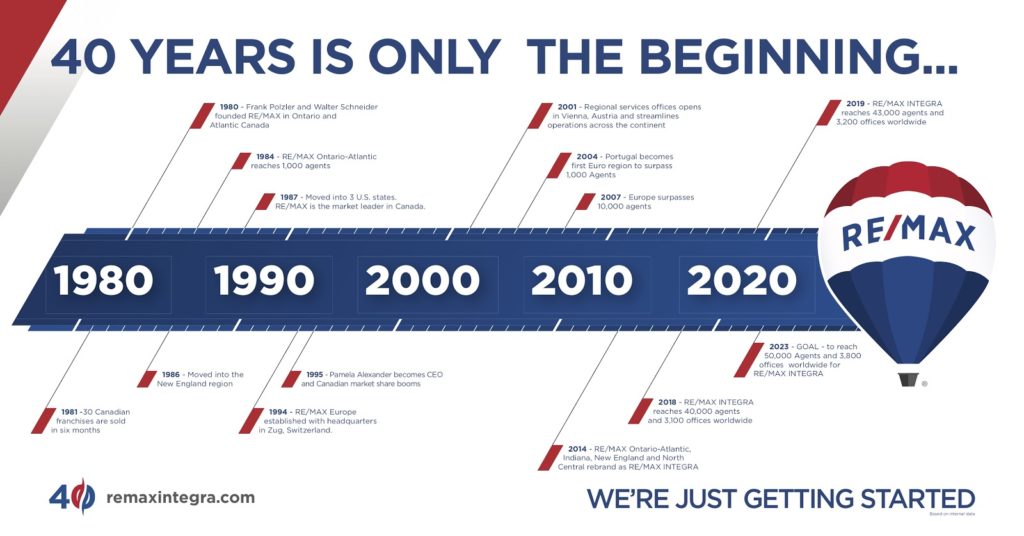 As the company celebrates its 40th anniversary, its founding aspiration has remained the same, beyond time and across borders – to be “home of the top producer.” In 2020, professionalism continues to be the company’s main focus, with agents committed to their clients and industry, and the strong undercurrent of modern technology pulling them toward success.

RE/MAX’s acquisition of the booj Platform is the most powerful tech advantage RE/MAX affiliates have ever had. Coupled with a modernized brand, a digital approach to marketing and an ever-evolving consumer experience on remax.ca, RE/MAX INTEGRA’s future looks brighter than ever. It includes a lofty goal of 50,000 agents and 3,800 offices by 2023.

The way real estate transactions are done may have changed in the last 40 years, but the passion, commitment and heart that founded RE/MAX INTEGRA haven’t gone grey. Thank you to all of the brokers and agents within the RE/MAX network who have allowed for so many wins over the past 40 years. Can’t wait to see what the future brings.