According to the new RE/MAX 2021 Condominium Report, strong demand has contributed to a significant uptick in condominium apartment sales in the Greater Vancouver real estate market, more moderate gains have been reported in terms of price in 2021. According to the Real Estate Board of Greater Vancouver (REBGV), the average price of a condominium apartment hovered at $740,221 in August of 2021, an increase of 6.7 per cent over the August 2020 average of $693,691. By comparison, the average price of a detached home rose close to 21 per cent in August 2021, with values approaching $2 million. 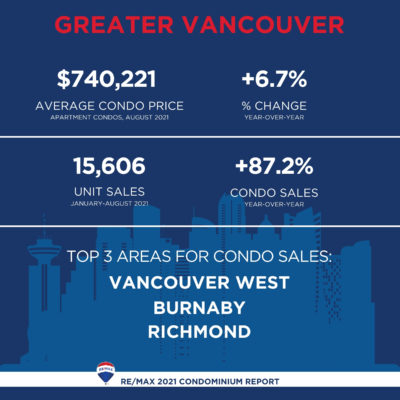 More than 15,000 condominium apartments changed hands between January 1 and August 31, 2021, up 87.2 per cent over the 8,047 units sold during the same period in 2020. Areas such as the Sunshine Coast and Whistler saw the greatest upswing in year-over-year sales, with percentage increases rising 140 per cent and more, over 2020 levels. Burnaby, West Vancouver/Howe Sound and Delta-South also posted strong gains in condominium apartment sales, with increases north of 100 per cent.

With affordability looming large in the Greater Vancouver real estate market, condominium apartments often represent the first step to home ownership. Forty-eight per cent of home sales across REBGV districts involved a condominium apartment in 2021. Many purchasers are first-time buyers, hoping to break into Vancouver’s heated housing market. Most are budget-conscious buyers, seeking resale product with a minimum of one bedroom plus den, and ideally located near the Skytrain. Hip areas such as False Creek, Coal Harbour and Yaletown are also popular, drawing younger buyers attracted to the area’s trendy shops, restaurants, and proximity to the walking and cycling paths.

Inventory levels have slowly declined in recent months, with condominium apartment listings in August down 27 per cent from one year ago. Dwindling supply is expected to place upward pressure on values in the months ahead, prompting more multiple offers on well-priced units. To date, that phenomenon has been largely limited to the single-detached and townhouse properties.

For the most part, domestic buyers have been driving buying activity of Vancouver real estate to date. However, with immigration expected to ramp up with the relaxation of Canada’s borders, there could be further pressure on housing sales and values in Greater Vancouver down the road.

At the national level, the RE/MAX report analyzed five key Canadian housing markets and more than 100 sub-markets, and found that buyers looked to condominium properties in 2021 as the affordable housing option, in the face of rising freehold values. The West experienced the greatest sales gains, with Greater Vancouver and Calgary condo sales up 87 per cent and 83 per cent respectively between January 1 and August 31 of 2021, compared to the same period in 2020, when a notable downturn in condo sales occurred.

The Greater Toronto Area (GTA) was the leader in condo sales in East Canada, up 71 per cent over the same period in 2020, followed by Halifax-Dartmouth (+36 per cent) and Ottawa (+29 per cent).

In terms of price growth in Canada, the greatest gains occurred in the East, with both Halifax-Dartmouth and Ottawa posting double-digit price gains of 30.0 per cent and 18.0 per cent respectively. More moderate appreciation was reported in Greater Toronto (+seven per cent), Vancouver (+6.7 per cent) and Calgary (+three per cent).

Growth in condo market share across the Canadian real estate market occurred in all but one regions surveyed, according to the RE/MAX Canada 2021 Condominium Report. The greatest concentration of condo sales was reported in Greater Vancouver, where condos represented nearly half (48.2 per cent) of total residential sales in 2021, up from 46 per cent one year ago. Condominium apartments and townhomes in the GTA followed with a 34.5 per cent share of the overall market, up from 30.8 per cent one year earlier. Almost one in four properties sold in Ottawa between January 1 and August 31, 2021 was a condominium, compared to the same period in 2020 (24.3 per cent versus 23.3 per cent). Meanwhile in Halifax-Dartmouth, the condominium segment represented 17.3 per cent of total residential sales, up from 15 per cent one year earlier. While overall sales climbed in Calgary year-over-year, condominium market share declined by just under one per cent in 2021, to 14.2 per cent.