Toronto real estate has long been characterized by its rising prices – a trajectory that has only picked up speed in the wake of COVID-19. This is good news for existing homeowners who are seeing their home equity grow by leaps and bounds. However, those hoping to enter the Toronto housing market as a first foray into ownership can expect affordability challenges to continue, thanks to persistently low housing supply and pent-up demand in this highly liveable locale. According to a RE/MAX report analyzing Toronto detached housing trends, home sales and prices have been on fire in 2020.

These are the top five neighbourhoods that experienced the most-pronounced rate of price growth between January and June 2020, compared to the same period in 2019. 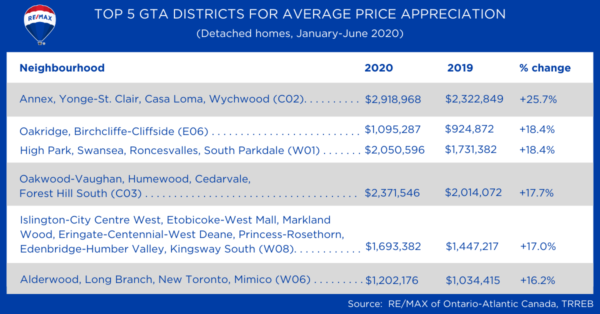 The pandemic threw an unprecedented wrench into a housing market that was, by all accounts, poised for a promising year. The RE/MAX 2020 Housing Market Outlook Report estimated average residential prices in Canada would rise by 3.7 per cent. Looking closer at various Greater Toronto real estate markets, increases were anticipated in the city of Toronto (+6%), Durham Region (+3%), Brampton (+5%), Mississauga (+5%), Oakville (+5%), Hamilton-Burlington (+3.8%). Further afield, increases were also expected in Kingston (+6%), Ottawa (+6%), Barrie (+5%), Kitchener-Waterloo (+7%), Niagara (+7%), London (+5%) and Windsor (+9%).

By March, the pandemic put pause to home-buying and selling across the country, with April experiencing a dramatic drop in activity. This prompted Canada Mortgage and Housing Corp. to forecast a decline in Canadian housing values in the range of nine to 18 per cent. This dismal projection was widely challenged by real estate industry experts, with RE/MAX anticipating a possible correction in the single digits by the end of 2020. By all accounts, the nosedive in prices did not materialize. Quite the opposite, Q1 and Q2 data suggests that Greater Toronto real estate markets have weathered the storm this far, with Toronto home sales and prices back on track.

The RE/MAX GTA Hot Pocket Communities Report examined sales and price trends across the Toronto Regional Real Estate Board’s 65 districts, and found that 95 per cent of them (62 out of 65 markets) posted solid price gains if the first and second quarter of 2020, compared to Q2 and Q2 of 2019. Double-digit price increases were reported in 60 per cent of 416 districts and in 50 per cent in the 905. 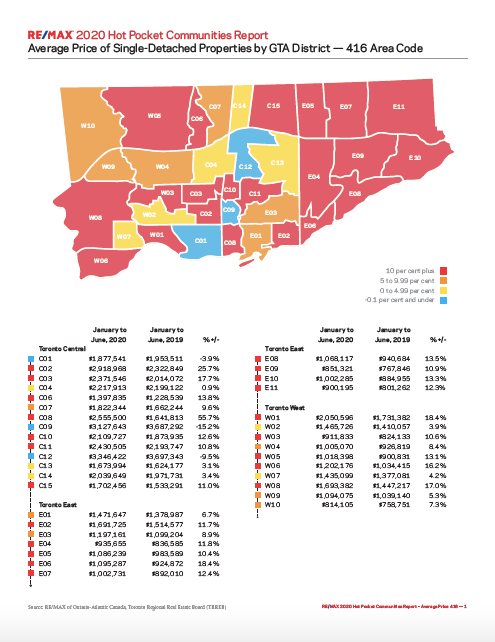 Detached home prices in the 416 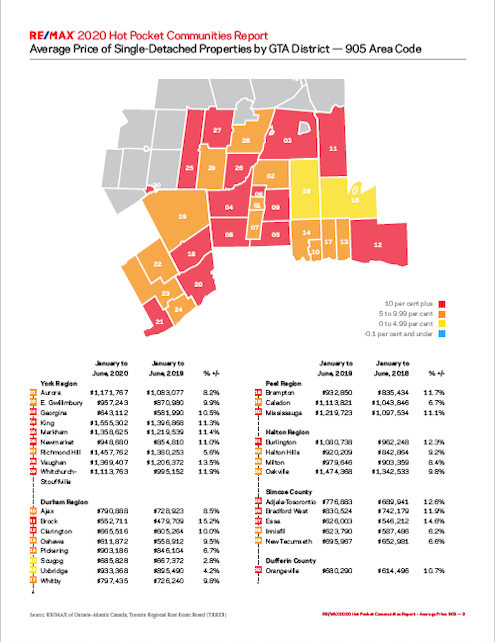 Detached home prices in the 905

Only three Toronto housing markets experienced a decline in price – all uber-luxury neighbourhoods where prices sit well above the average for the city. These include:

Where can you buy Greater Toronto real estate for under $1 million?

Affordability continues to be an issue across Greater Toronto housing markets, with more and more districts surpassing the $1 million mark this year. Just five markets in Toronto proper offer an average detached price below $1 million, down from 12 markets last year. Those markets include:

Greater affordability exists in the 905 where a single-detached home in 20 of the 30 districts is priced below the $1 million benchmark. The vast majority of these are located in Durham Region, Simcoe County and Dufferin County, where average prices range from $552,000 in Brock, to $933,000 in Uxbridge. Newmarket, Georgina and East Gwillimbury in York Region, Halton Hills and Milton in Halton Region, and Brampton in Peel are also priced below the $1 million.

Certainly, if we look at the markets that have experienced an uptick in sales, it’s no surprise that Innisfil, Oshawa and Georgina have seen strong gains this year. That trend is expected to continue as values rise within the 416 and purchasers looks to get more bang for their buck north, east and west of the city.