RE/MAX Canada’s latest report looks at the Canada real estate market through a lens of climate change and the risks to homebuyers, which include displacement due to extreme weather events, higher insurance premiums and compromised liveability, and are already being felt by homeowners from coast to coast.

According to the Insurance Bureau of Canada, the estimated trend of the overall costs of catastrophic losses has increased from approximately $1 billion in 2005 to almost $2.5 billion in 2021.

“These climatic stresses are increasingly colliding with federal and provincial government housing policies, which aim to significantly increase the country’s housing supply to rectify the chronic lack of inventory. Yet, the need to restore and retain green infrastructure, such as wetlands, and the immediate need to upgrade our hard infrastructure, particularly sewage systems, coupled with a decline in developable areas due to extreme weather could make these goals difficult to achieve unless these factors are all integrated as one program,” says Christopher Alexander, President at RE/MAX Canada. “In the meantime, giving guidance to homeowners on how to take advantage of programs that already exist, such as the Climate Adaptation Home Rating program, in combination with things such as energy assessment, is important to share throughout the home-buying journey.”

While many residential real estate transactions are conditional on a home inspection to assess and confirm the potential risks assumed by the homebuyer, buyers and sellers have no such access to information regarding the property’s climatic risk.

“Most of Canada’s flood maps are 20 to 25 years out of date,” says Kathryn Bakos, Director of Climate Finance and Science at the Intact Centre on Climate Adaptation. “In order to protect the significant investment of homebuyers, we first need the most up-to-date information and then we need to integrate that information into the standard disclosure process when purchasing a home.”

According to Dr. Mike Moffatt, Senior Director of Policy and Innovation at Smart Prosperity Institute, this initiative should be government led and then adopted by the real estate industry, once the mapping and data have been updated, to ensure homebuyers have the most complete picture of the risks, or lack thereof, of the property they’re considering purchasing.

According to a Leger survey conducted on behalf of RE/MAX Canada, 49 per cent of Canadians are worried about the impact that forest fires, flooding and other weather-related events will have on their neighbourhood and community over the next five years. 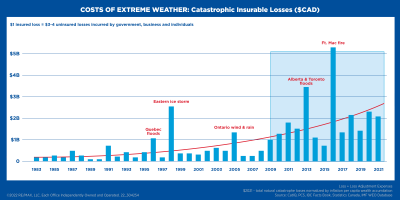 As reported by The Canadian Institute for Climate Choices, real estate (all types) represents more than 75 per cent of Canada’s produced wealth. To protect this wealth from the disruption of climate change, new levels of transparency in buying and selling homes should be considered.

A pan-Canadian study completed by the Intact Centre on Climate Adaptation investigated whether community-level flooding affects Canadian residential real estate (detached, semi-detached and row housing) in respect to average (a) sold price of a house, number of days on the market to sell a house, number of houses listed for sale, and (b) mortgage arrears and deferrals over a 10-year period (2009-2020). The study was conducted within a period of six months before and six months after each catastrophic (major) flood event and used a control situation to isolate for the effects of flooding. Communities that experienced a catastrophic flood between 2009 and 2020, within a six-month post flood time-frame, experienced:

Mortgage arrears and deferrals tended to fall within market norms, yet the study did show that loan-to-value would be impacted.

Yet, climate change risk is not a static condition. It’s fluid. As climate patterns shift, infrastructure is modernized and other factors come into play, risk exposure may change. Some areas at risk now will move to resilience if adaptation measures are put into place and vice versa.

Nonetheless, should governments take the lead in significantly modernizing Canada’s climate risk picture—through flood mapping—the integration of physical climate risk disclosure in real estate transactions, starting with appraisals, would help Canadians better protect their financial future. Beyond their financial security, the quality of life they derive from their communities would also be continually sustained.

“In principle, adding physical climate risk to the list of disclosures is very logical. It would help residents across Canada identify areas and neighbourhoods of resilience, which could drive additional investment, stronger liveability, lower insurance premiums and a more resilient housing market in those regions,” says Elton Ash, Executive Vice President at RE/MAX Canada. “But for it to work as intended, the information must be current and robust, and adaptation and mitigation investments need to be advancing in lockstep.”

Unlocking the Future: The Climate Chapter is the second chapter of a five-year outlook on Canada real estate, developed by RE/MAX in collaboration with Kathryn Bakos, Director of Climate Finance and Science at the Intact Centre on Climate Adaptation; and Dr. Mike Moffatt, Senior Director of Policy and Innovation at Smart Prosperity Institute.

The first chapter, The Economic Chapter was developed in collaboration with CIBC and The Conference Board of Canada and examined how the the housing market in Canada might respond to economic scenarios between 2022 and 2027, specifically, interest rate hikes, annual immigration volumes and taxation.

The Climate Chapter examines how the country’s housing market might respond to climate change-related scenarios between 2022 and 2027, such as floods, and wildfire, as well as severe storm events.