Price growth expected in all small markets analyzed, with average increases ranging from 3% to 20% in some areas

Toronto, ON and Kelowna, BC – April 13, 2022 – A new report from RE/MAX Canada finds that “small” Canadian real estate markets are attracting new residents and homebuyers primarily for the liveability factors that they offer, such as green spaces and neighbourhood dynamism, to name a few*, ahead of affordability by a slim margin. The 2022 Small Markets Report analyzed home sales and price trends in the fastest-growing small Canadian housing markets, which are defined as those with the highest population growth rates in 2021, and having a population of less than 440,000, with secondary markets below 100,000**.

Residential prices in these communities have continued to rise as a result of low inventory and growing demand. RE/MAX Canada brokers and agents anticipate residential price growth across all small markets analyzed in the report, with expected price increases ranging from three per cent up to 20 per cent in some regions through the remainder of 2022. Unsurprisingly, some of these markets have already experienced significant year-over-year price appreciation in the range of 17 to 46 per cent. 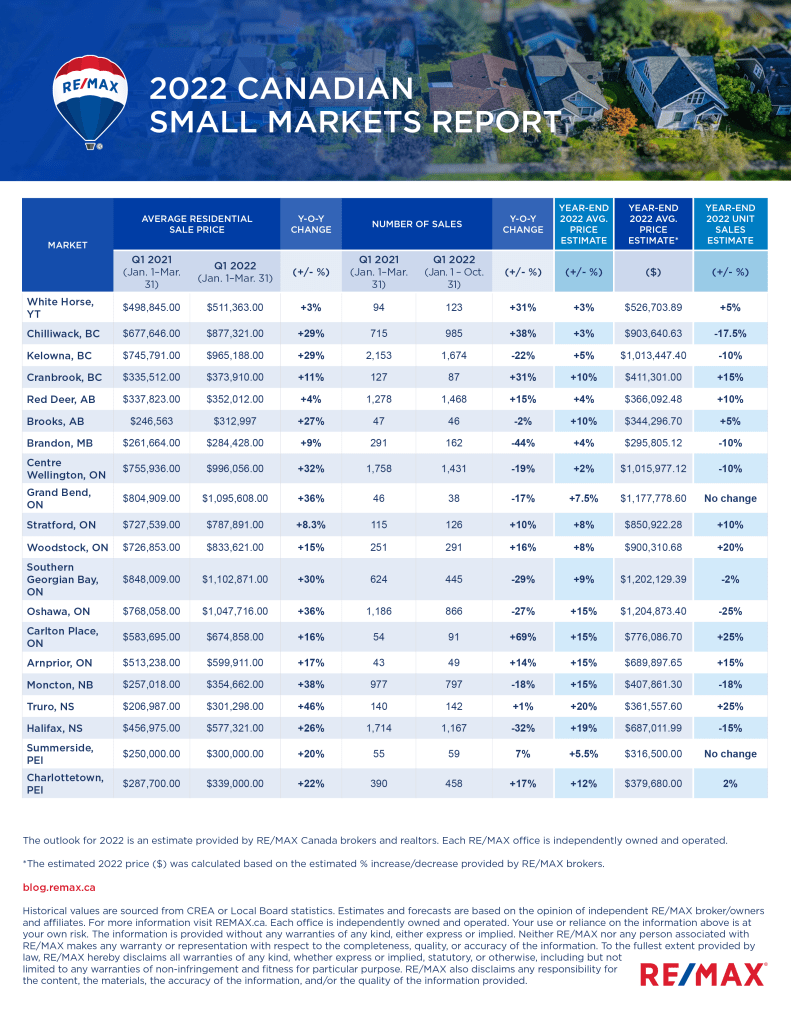 Activity in these communities has been fuelled in part by the financial support that many Canadians have received from family, with 25 per cent of Canadians using financial support from family in order to purchase a home, according to a Leger survey commissioned by RE/MAX Canada. RE/MAX Canada brokers and agents in 83 per cent of regions surveyed have also witnessed this trend locally, specifically among first-time homebuyers.

“Liveability is all about quality of life, and as we all work toward getting back to enjoying the things we love the most about our communities, it’s not surprising that it ranks so highly in importance for Canadians – especially now,” says Christopher Alexander, President, RE/MAX Canada. “Despite the fact that the national housing market still has challenges to overcome, smaller communities are viable options for Canadian homebuyers looking for the right balance between liveability and affordability. The increase anticipated for home prices for the remainder of 2022 by our network of brokers and agents is a good indicator of the appeal of these communities.”

However, the desire for liveable communities plays both ways, with 57 per cent of residents in small Canadian real estate markets voicing concern that the distinct liveability qualities of their town ─ its charm ─ may be eroded as a result of rising demand from move-over buyers. Another 43 per cent share the same anxiety about rising prices, feeling that they could potentially be priced out of their community, if the trend persists.

According to the Leger survey, during the pandemic, 23 per cent of respondents moved from a larger Canadian housing market to a smaller one, and 85 per cent are happy about their move; while 52 per cent of Canadians that moved to a small town believe their mental health has improved after moving.

“We’ve seen a greater influx of buyers moving to smaller markets over the past two years, a trend that’s prompted some concern among existing residents. However, the diversity of new homebuyers can be a positive thing for local communities,” says Elton Ash, Executive Vice President, RE/MAX Canada. “The recent notable growth of these smaller Canadian real estate markets makes it an opportune time for municipal and provincial governments to focus on alleviating these concerns through measures that address affordability and housing supply, but also aim to revitalize and improve community liveability that has made these regions the preferred choice of many Canadians.”

This keen interest in small Canadian real estate markets doesn’t seem to be waning, as gathering and workplace pandemic restrictions continue to ease across the country, and more Canadians return to their office settings on a full-time or hybrid basis. According to the Leger survey, the ability to work from home has motivated 14 per cent of Canadians to move to a smaller community. Furthermore, 11 per cent of Canadians indicated that should their employer require them to return to work in-person, they would look for another job in order to stay in their small city/town/community.

RE/MAX Canada brokers and agents were asked to provide an analysis of local market activity for the first quarter in 2022, and give their outlook for the remainder of the year.

RE/MAX Canada surveyed brokers in Moncton, NB, Charlottetown, PEI, Summerside, PEI, Truro, NS and Halifax, NS and found that these regions are all sitting is seller’s territory due to low inventory and insatiable buyer demand, which is expected to continue through the remainder of 2022. Average sale price increases are expected, rising +5.5 per cent in Summerside; +12 per cent in Charlottetown; +15 per cent in Moncton; +19 per cent in Halifax; and +20 per cent in Truro.

RE/MAX brokers and agents in Atlantic Canada anticipate their markets to continue to be sought after by out-of-province buyers, and in some cases new immigrants, as the pandemic has shifted what people want in a home. Specifically, there is a newfound appreciation for smaller communities across Atlantic Canada.

Throughout the pandemic, local RE/MAX brokers have reported an influx of out-of-town buyers seeking affordable housing, larger living spaces and a close-knit community feel. Many of these regions, including Oshawa, Carleton Place, and Arnprior, already have the infrastructure and public transportation in place, offering residents an easy commute to work in the city.

Much like the rest of the country, Western Canada’s small markets continue to favour sellers, including Kelowna, BC (2.6 per cent population growth), Chilliwack, BC (2.3 per cent population growth), Cranbrook, BC, Brooks, AB, Red Deer, AB and Brandon, MB. Many of these regions are welcoming buyers from other regions and provinces (primarily Ontario), with interest in single-detached homes that offer more indoor and outdoor living space. Over the past few months, these regions have seen stronger buyer confidence and less urgency to purchase a home. This has resulted in fewer bidding wars and signals that the market is beginning to settle; however, it is too early to predict indefinitely. According to RE/MAX brokers and agents, average residential sale prices are expected to increase in +3 per cent in Chilliwack, BC, +five per cent in Kelowna, BC, +10 per cent in Cranbrook, BC, +four per cent in Red Deer, AB, +10 per cent in Brooks, AB, and +four per cent in Brandon, MB.

This report also analyzed the region of Whitehorse in the Yukon (2.4 per cent population growth), which is currently a seller’s market that is anticipated to continue for the remainder of 2022. Average price is expected to increase +three per cent. In this region, condos and townhomes are seeing the most activity, both in terms of sales and new construction. However, supply cannot keep up with the demand, and is driving prices up. Whitehorse has been a hotspot for new immigrants in particular, with municipal programs in place to help them integrate into the community. The region is also seeing out-of-province buyers who are falling in love with the lifestyle of the North.

The 2022 RE/MAX Small Markets Report includes data and insights supplied by RE/MAX brokerages. RE/MAX brokers and agents were surveyed on activity and local developments in small Canadian real estate markets, based on local board data and activity in 2021 and 2022.

**Small markets were defined as those having the highest population growth rates in 2021, according to Statistics Canada, and population under 440,000, with a secondary criterion in order to ensure a good sample of national markets of those with a population of 100,000 or less.

About Leger
Leger is the largest Canadian-owned full-service market research firm. An online survey of 1,525 Canadians was completed between March 25-27 using Leger’s online panel. Leger’s online panel has approximately 400,000 members nationally and has a retention rate of 90 per cent. A probability sample of the same size would yield a margin of error of +/- 2.5 per cent, 19 times out of 20.